Jump to contentJump to search

Mankind can look forward with great anticipation to the doctoral thesis of Svea Stratmann on the subject of "Restructuring paths in the light of competition law". At least that is the prognosis of a student jury that met on March 9, 2021 in Harry's Café, the virtual meeting place of the Faculty of Law at Heinrich Heine University. They decided the competition "Chart your art! - Paint your thesis!" In a rather whimsical atmosphere, seven academic staff members competed and presented their doctoral theses in seven-minute presentations each. The special feature: the legal research projects had to be explained and drawn. The student jurors awarded prizes in the categories "Most beautiful drawing", "Highest fun factor" and "Potentially greatest benefit of the doctoral thesis for mankind". Svea Stratmann, whose thesis is supervised by Prof. Dr. Nicola Preuß, won in the latter category. However, all candidates solved the tasks masterfully and were enthusiastic about doctoral studies in general and their partly quite special topics in particular. 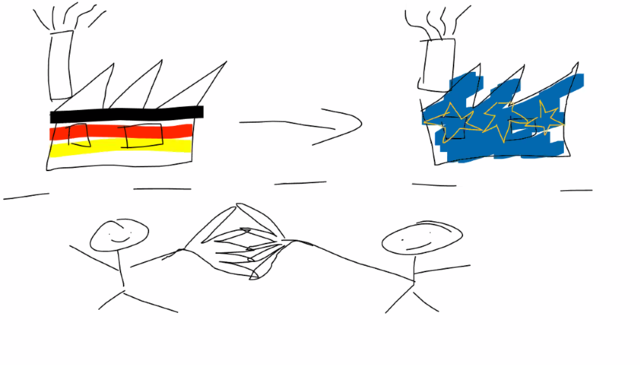 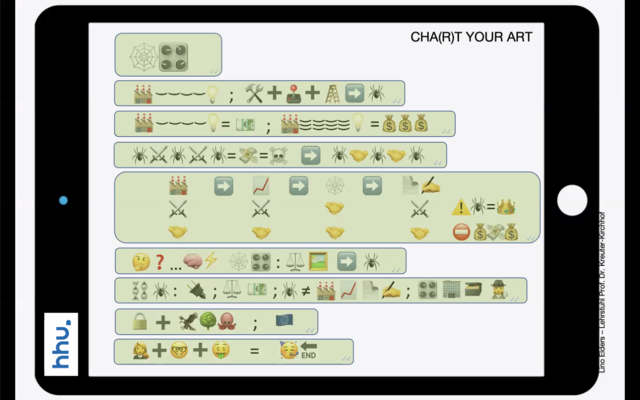 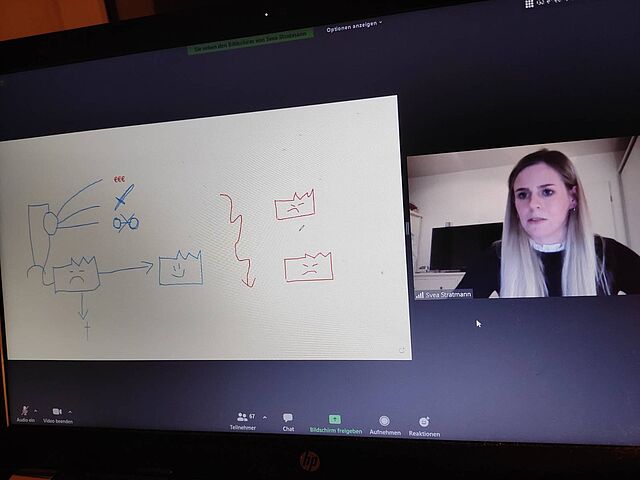 Eric Musebrink, who is doing his doctorate on participation rights in the European Company under Professor Feuerborn, kicked things off. Lino Elders, who is writing about network codes in the energy industry under Professor Kreuter-Kirchhof, artfully relied on emojis instead of painting - which at least earned him a special prize. Two young researchers in antitrust law followed: Thomas Scherer (antitrust damages litigation and arbitration, supervised by Professor Kersting) and Fabian Brauckmann (third-party participation in antitrust proceedings, supervised by Professor Podszun). Scherer, who works at the chair of Professor Lugani, won the prize for the most beautiful drawing with his "Sun of Competition".

Sascha Peters used the example of sports betting to explain his topic "Coherence as Truthfulness Control" (supervisor: Professor Dietlein). The evening was concluded by two ladies - with the order of presentation being drawn by a digital wheel of fortune. After Svea Stratmann stepped down, last but not least, we went into international tax law: Stella Langner from the chair of Professor Valta spoke about the importance of the "observations" on the commentary of the OECD Model Convention in the interpretation of double taxation treaties. What may sound dull to some, delighted the jury: At the latest when Langner drew the "hissing tax dragon", it was clear that she deserved the prize for the highest fun factor.

The evening was proof that insights into research can be exciting and entertaining - and that many a talent lies dormant in the scientific staff of the faculty that has so far remained undiscovered. The evening was moderated by Prof. Dr. Rupprecht Podszun, who had Clemens Pfeifer with him as sidekick and for the technical questions.

Harry's Café is open on Thursdays from 4 p.m. and Tuesdays from 7 p.m. during the lecture-free period. The dial-in dates can be found in the student portal. During the semester break, the law student council and Prof. Dr. Katharina Lugani and Prof. Dr. Podszun organize the program.